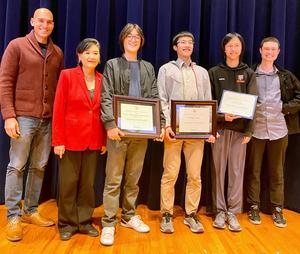 SPUSD recognizes fantastic work by SPHS students Jeff Chen, Lewis Polansky, and Evi Shih. These students earned first and third place awards in the 2022 Congressional App Challenge.
The Congressional App Challenge is a competition intended to encourage students to learn how to code and inspire them to pursue careers in STEM (Science, Technology, Engineering and Math) fields. The Challenge allows middle and high school students to compete against their peers by creating a unique app on a platform of their choice.
First place winner, 12th grader Jeff Chen, designed an app called PC Posture that uses a camera to track the user's posture and provide timely feedback for improvement. His inspiration was his own self-awareness that his posture became progressively worse during distance learning two years ago due to the many hours spent on a computer.
Third place winners, 12th grader Lewis Polansky and 11th grader Evi Shih, designed an app called Lexi to facilitate chat-based communication between speakers of different languages.
The winners from the 27th Congressional District, chosen by a panel of expert judges from CalTech and JPL, will be featured on CongressionalAppChallenge.us. The winning apps will also be eligible to be on display in the U.S. Capitol, honoring the winners from across the country.
Go, Tigers!
For more information, contact: South Pasadena Unified School District, [email protected]
Published December 21, 2022